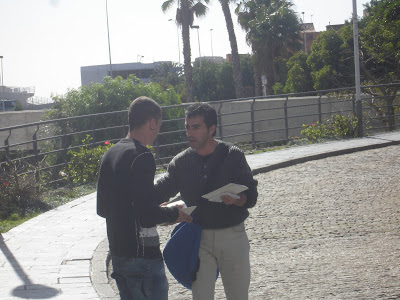 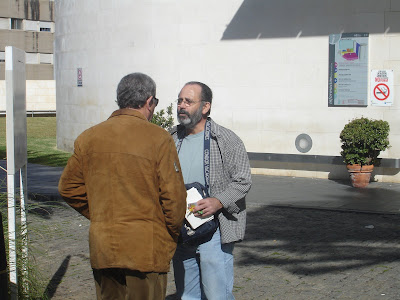 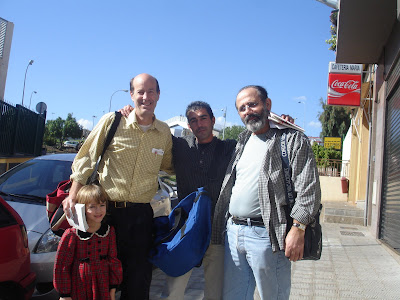 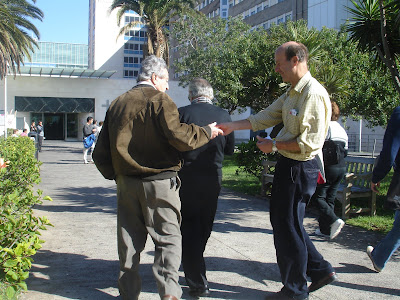 (Pictures of me and some men in our church passing out John and Romans.)


Dear Brothers and Sisters in Christ,
One of the highlights of this month’s activities was when Manolo, who was one of the homeless drunkards of the city, came up to Pedro, a man in our church, who was visiting with me on Saturday. I have seen him living in one of the nearby parks, with his bag and bottle, and always have had a heart for him, inviting him to church and praying for him.
Well, this day, he approached Pedro, and I sat behind them in my car as I was getting ready to leave, just praising the Lord, because he let Pedro lead him through the Bible. Pedro called me a few minutes later with the great news that Manolo had given himself to the Lord! We both rejoiced, praising God, and Manolo came to church on Sunday for both services in the morning, and gave a testimony with a tear in his eye, that he was ‘glad that he entered into a new family!’ He has not been to church the last two Sundays, so I am asking special prayer for him.
We have been to a couple of the hospitals lately witnessing, giving gospel tracts and John and Romans at the entrance. We also have been to the nursing home twice this month singing and preaching the gospel. Pedro is on fire for the Lord, and last Saturday after fasting a few days, preached a sermon on the Good Samaritan on the sidewalk in front of the city mission where many were listening. No one got saved that we know of, but we had two new visitors because of it on Sunday. Pray for Roakim and Ernesto’s salvation and also for Ceasar, a first time visitor.
I have mentioned the fact that I am trying to get into the prison here to minister on a personal basis and also conduct church services. They have not answered my calls, so now I am writing a letter to the Director about this. The inmates have also written requests to her, asking that she would allow me to come in and preach. Please make this a matter of prayer, as I believe that this is God’s will, and many souls could be saved and lives changed.
Church is going well, and God is blessing the services. I am having a great time preaching and teaching, and by the way, singing, of all things--as I am also the song leader! Well, sometimes I do mess up, and start on a bad note or something, so Carolee has to bail me out from time to time. Amen! We also are going to hold a free dinner at church for all the homeless at the mission across the street. We will preach the gospel, so please pray for these souls.
Thank you for all you do for us,
The Schwaderer Family serving God in the Canary Islands.
Posted by Carolee's Corner Canary Islands at 9:06 PM No comments:

This is a mixture of thoughts, so I named it "Odds and Ends." Actually, that was the name of the newspaper column my Grandmother Dorothy used to write in the Port Charlotte, Florida local newspaper every week. She was an interesting person--and was influential in starting the first library in our home town, New Lebanon, Ohio, and was very active in community affairs.

Thinking of her, one of the things I remember most about her was how she used to tell me about surviving the Great Depression. She was raising her family during that time, and my grandfather was operating a greenhouse/nursery business and they all pulled together to stay afloat during those tough economical times.

Living through something like that certainly would leave an impression on you, so it is no wonder she used to tell us how she saved money by purchasing her clothes at the Goodwill (back then we thought it was kind of funny that she did that--but it is something that I have done myself throughout the years). She rarely threw something away that might be useful, from empty bread bags, reusing aluminum foil, saving rubber bands, etc. We used to laugh at her frugal ways at times, but she was very smart with her money and was able to retire and have a comfortable living.

Today I had to laugh when my husband came back from taking out the trash to the dumpster at the end of our street. In a hurry as always, as he was running late for a church activity, I was surprised when I heard his car pull up after he had just left a few minutes before.

He brought back a mattress that was sitting outside the dumpster. My first thought was GROSS! Without even looking at it, I didn't want it in our garage because I could just imagine cockroaches coming out of it. I could hear him unloading it, telling the girls how it was brand new, still in the plastic..... and then I heard Leanna excitingly chime in, "Yea, it looks brand new." At that point I knew it must be OK if it met the girls approval (they must think like Mom).

It had only been sitting out there for a day--but Doug was right, it was BRAND NEW! It was still in the factory plastic. The only thing that I can think of is that the man down the street drives a delivery truck for a very ritzy department store here in Tenerife, and perhaps he had this on his truck and for some reason needed to get rid of it.

Anyway, it will be a very nice Christmas present for a couple in our church who are in need--a brand new matrimonial size mattress!
Posted by Carolee's Corner Canary Islands at 1:59 PM 1 comment:

The other day Doug and I were sitting in our parked van (Doug was getting ready to go in and talk to our mechanic) when a teenager started to back up his sports coupe--right toward our van--where I was sitting! As I watched the car back into us, I wondered how long it would take until he realized what he was doing, and if I was going to be affected in the impact! Doug tried to honk the horn, but since the engine was off it wouldn't sound.

The guy pulled up after he realized what happened and jumped out of his car. I was expecting an apology-- but much to my surprise he got out of his car and was angry with us as he inspected the damage done to his car! What did we do, I asked myself. He asked us for our insurance information, and proceeded to tell us how his car was brand new--he was obviously nervous and shook up.

What really made me irritated was how he started telling everyone that we were trying to go around him and that we hit him! I couldn't believe my ears. Our vehicle wasn't even moving!! Doug and I both were trying to set the record straight, but I don't think he was ever convinced that he was in the wrong. This was our first experience with a "fender bender" here so we weren't exactly sure if we were supposed to call the police, or just exchange information.

I remembered that my cell phone had a camera, so I also began snapping photos "just in case." Doug called our insurance agent, and they didn't seem concerned. She said they normally fault the person backing up. Fortunately it wasn't serious, with only minimal damage. More than anything it was merely a frustration, especially when wrongfully accused--especially as they tend to distrust foreigners in the first place. Doug was very kind to they young man, and was able to give him a "Smiley" face Bible-- hopefully it will give him something to think about as we left on good terms, not getting angry at him for hitting our van!
Posted by Carolee's Corner Canary Islands at 1:08 PM No comments:

Family, Friends, and The Dollar Store

Yesterday Leanna was up in her room for a while, and whenever it gets really quiet, I know she is up to something (several times she has given herself or her dolls haircuts). So I called up the stairs, and she said she was packing.

"For furlough," she responded in a rather matter of fact tone.

"Furlough?" I chuckled. We probably won't be going on furlough for a few years. What gave you the idea to pack for it so soon?"

"I just don't want to forget anything." she said.

Leanna had her favorite little suitcase filled with her favorite clothes, as well as a green duffel bag. She brought them downstairs to show me.

I couldn't convince her to go upstairs and unpack everything. I realized she was having too much fun.

"So, what is it that you miss the most about the states?" I asked.

My friends at church.

Oh yea. The Dollar Store. When I go to the states I want to go to the Dollar Store and buy a bunch of suckers. (She likes the ones that are 4 for a $1.00 that have gum in the middle).

Kids are funny aren't they? They are so honest.
Posted by Carolee's Corner Canary Islands at 10:40 AM 3 comments: