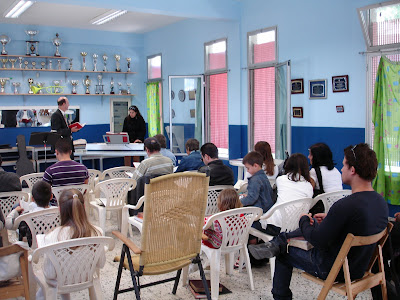 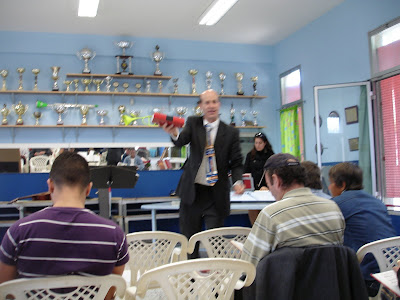 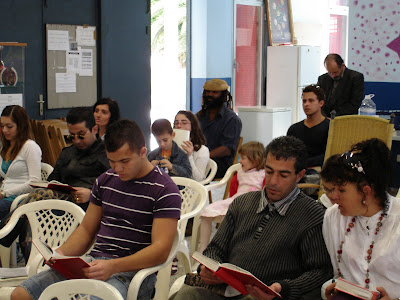 Just thought I would post a little "update" on how things are going over here. We had a very encouraging church service today, with several visitors. One young lady (whom Doug had invited to church yesterday during visitation), came in at the last 15 minutes with a friend, and was very broken and crying during the preaching. Doug was talking about the suffering of Jesus and how much he loved us, doing what he did for you and me. At the end of the service, Doug invited anyone who had never called upon the Lord for salvation and forgiveness of sin to do so, and she raised her hand and prayed, calling upon the Lord to be her Saviour. It was a great blessing to see such humility and moving of the Holy Spirit.
Another blessing is to see how God is working in restoring families. Two couples that have been struggling have been coming to church together, and it seems like in spite of all the difficulties (which we all have from time to time) they are trying to work things out and unite their family under God and His word.
We appreciate all of you who are praying and giving so faithfully, enabling us to continue our work here in the Canary Islands.
Posted by Carolee's Corner Canary Islands at 6:14 PM 1 comment:

Corruption is Mozambique's Most Dangerous Problem

I just found this on the Internet, and find it disheartening, but unfortunately very true. It was of great interest to me as my son and his family are missionaries to the country of Mozambique. Corruption makes the missionary's job and life much more difficult.


According to the news source "Afrique En Ligne:"

The Director of Mozambique's Central Office for the Fight Against Corruption, Ana Maria Gemo, warned on Tuesday "corruption is not the only ill that undermines the development of the state, but it is certainly the most dangerous".

Giving a lecture to an audience of over 500 in Maputo on "Corruption as an obstacle to development", Gemo said what is often referred to as "petty corruption" is widespread and "makes life impossible for citizens".

Petty corruption refers to such abuses as teachers demanding bribes from their pupils, health workers extorting illicit payments from patients, or policemen only investigating robberies if the victim pays them something."Petty corruption violates citizens when they use state services to which they have a right," said Gemo, adding that the use of the state by its own employees for personal enrichment "makes our growth and development impossible."

Measures were being taken against such behaviour, Gemo said, disclosing that from January to October 2008, proceedings were begun against 429 state employees accused of corruption.So far this month, she added, 10 public employees have been arrested in Maputo city and province alone for "illicit practices.""

A change of attitude is imperative," said Gemo, charging "we, the public functionaries, must make the people believe that we are here to serve them."Frowning at theft of state funds, she warned that the maximum penalty for a civil servant who raided the state's coffers was 24 years imprisonment."The GCCC is committed to preventing this evil", she said, adding that "our
concern is to encourage a change so that everyone works to dignify the state.

The fight against corruption involves the serious collective will of all those working i n the public sector, as well as the existence of adequate and pertinent legislations. We must all be soldiers in this battle."At the meeting, Minister for Public Service Victoria Diogo, urged state employees to reflect upon their current manner of serving the public, calling them to adopt a more fitting, honest and efficient way of performing their duties.This is one of a series of 20 meetings on corruption, aimed essentially at the public sector and being held throughout the country in January Maputo - 21/01/2009
Posted by Carolee's Corner Canary Islands at 7:34 PM No comments:

Today as I was checking my email, I saw an ad saying "Learn a Language in Just 10 Days!!" Oh, if only it were that easy! We were missionaries in Mexico for 6.5 years, and have been in the Canary Islands for almost two, and I am still learning the language!

First of all, I thought I had a pretty good grasp of Spanish when we lived in Guadalajara, Mexico, where I attended language school. Mexican Spanish is much easier for me to understand than Castilian Spanish. To make matters worse, we had a 17 year gap in between mission fields, although Doug and I both taught Spanish in Christian schools, and Doug continued to use his in the jail ministry. Doug even went on to get his degree in Spanish.

I was very rusty when we first came to the islands. We had to learn the dialect of the islanders, which has its own nuances. The people from the "peninsula" (what they call the people from mainland Spain) are very proud of their "Castellano"--as they call it when referring to their language, not Spanish. We have been corrected a few times for that. They also will look at you funny if you use a word that is typically Mexican or from Latin America.

Some days I think I do pretty well--then others my tongue seems all tied and I can't express myself like I want. Learn a language in 10 days? Maybe 10 years would be more like it.
Posted by Carolee's Corner Canary Islands at 9:11 PM 3 comments:

Labels: Culture, Life on the Field

Technology and the Mission Field

Things have changed alot since we were first missionaries back in the 1980's. The first difference is how we raised our support. When we first started out in 1982, Doug relied on "lists" of pastors names and churches where other missionaries had been previously and that were welcoming to missionaries. These lists were coveted by missionaries and weren't easy to come by--as you can imagine. Now with the Internet, a missionary has access to many websites where like-minded churches are listed by state with phone numbers. I remember back in the 80's my husband would look in the yellow pages of different cities to find Baptist churches in the area, or visit local libraries and pour over their copies. It still takes long hours of phone calling (and much patience) to make meetings, but the Internet is a great reference tool.

Another big difference is in the way long distance calling has become much cheaper, through Internet telephone and calling plans that feature unlimited long distance. When we first started deputation back in 1982, our phone bill exceeded $400 per month!

Once on the field, staying connected to family and friends was more difficult too. Back then telephone lines were still hard to come by in Mexico, with long waiting lists and a cost of over $500 just for the installation. It was money that we didn't have, so we lived without a telephone in the house. Occasionally we would go to a neighbor's house to make a call back to the states, but the cost was over $1.00 per minute! I think I only spoke with my mom once the entire time we were in Mexico.

Because of that, our favorite thing to do was go to the post office to see if we had any mail. My dad would faithfully send me a letter every week, along with some Time magazines he had already read--that was my only source of American news.

Now with the Internet, I can talk to my kids several times a week, and occasionally seeing them on the web cam. I can look at news and video clips from the states, even purchase hard to find items (even though the postage is a little outrageous). We can handle more of our financial matters too, instead of waiting for checks to come in the mail!

I feel much more "connected" to my family and friends than I did when living in Mexico. Of course, missionaries have been living for generations without the benefits of modern technology, but in many ways it has been an effective tool in spreading the gospel.

Of course, with every good thing there is also the temptation to depend on it rather than reliance on God--technology can't replace the power of God. For example, some of our contemporaries would laugh at my husband for his "old fashioned" slide show--(he didn't want to be up in front of a church trying to fix a technical problem with a computer that was beyond his know how) but when they saw his heart for God and passion for people, it didn't seem to matter that he didn't have the latest power-point multi-media production. Don't get me wrong, I believe a missionary should have a professional and well prepared presentation, but no matter how fancy, how slick you make it--the Holy Spirit has to be in it--and that will never be replaced by the "old fashioned" methods of prayer, fasting and spending time in God's Word.
Posted by Carolee's Corner Canary Islands at 2:05 PM 2 comments: