Stayin' Cool in the Heat 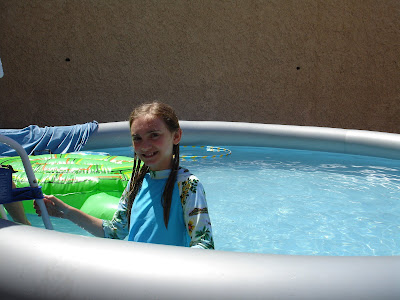 As for weather here in the Canary Islands, I can't complain too much. Most of the year it is in the 60's-80's, depending on whether it is winter or summer, with a cool ocean breeze blowing much of the time. But the past week or so we are in a heat wave, caused by a storm know as "calima" which is sand from the Sahara desert caught up in the atmosphere, then blown over our way here in the islands. Hot air gets trapped in the air above, and the temperatures can rise to high 90's or 100 degrees. Everything is covered in a layer of thin dust--Doug just washed the cars only to find them dirty again within hours.

So, while it is hot, the kids and I have found a fun place to escape the heat. I bought this little pool for a very good price when we moved into our house here, and it is the best investment we have made, considering the heat and lack of air conditioning. So when we need to cool off, we make a little trip into our backyard pool, and then back in the house in front of the fans!!
Posted by Carolee's Corner Canary Islands at 11:08 AM 4 comments:

Preach the Gospel to Every Creature

Being on the mission field is full of interesting moments, unexpected events, and you never know what to expect. Lately my husband has become very attached to our dogs, Billy and Petunia. Doug is such a devoted master to his pets, praying for them as he puts them out every night to sleep. He has even gone so far as to say that he hopes there is a heaven for dogs.

Well, at least someone is responding to the gospel over here, as yesterday during the church service we had an unexpected visitor. Right when Doug was in the heart of his Sunday sermon yesterday, a brownish, terrier mutt decided to join our services, coming in the door, and sat down, listening and behaving perfectly for the rest of the service. Maybe the Lord is answering Doug's prayers.......maybe there will be dogs in heaven after all!!
Posted by Carolee's Corner Canary Islands at 11:23 AM No comments:

How many times have you said to yourself, "I would NEVER do that." There are some things that I hope I never do, especially when it comes to obeying God and the Bible, I hope I never displease my Lord in committing a sin which I should never do.

But I am talking about another kind of never. The kind where you whisper to yourself, I hope I never will have to do that again. For example, we have moved 11 times in 27 years of marriage, and each time I say, I NEVER want to move again!!

One day when my kids were little, and attending a Christian school in Dayton, OH, I was following a big yellow school bus and watching the kids on the bus jump up and down, moving around, and said to my kids..."I would never want to drive a school bus." Not to long after that, I saw a position open at the Christian school to drive a school van back and forth to the campus my children attended. It sounded perfect, I would get to keep the van at my house, and take my kids to school, which I was doing anyway, and get paid for it. Best of all, I would be with my children, and be home when they were home.

I got the job, but there was a little more to it, I would have to get a commercial driver's license with a passenger rating because I was transporting more than nine students, and that test had to be done in a bus! A big, yellow, school bus.......the kind I said I would never drive! I took the training, and nervously took the practical driving test which involved various maneuvers with the bus. I managed to pass somehow!

Then one day the bus captain called and said, "Carolee, we have 70 students enrolled at the new campus......you will have to drive a bus instead of a van." I remember thinking, how did I get myself into this? I felt committed to the job since the school paid for my training, etc. so I did it for one year. Sometimes I would be in tears at the end of the day (after all the kids got off) but somehow I got through it, maybe the Lord used it to give me more patience.


When we moved up to Rochester NY for my husband's new ministry in the jails, we visited a church that I never really wanted to join. I didn't think the ladies were like me, they all baked homemade bread (so I thought) and were willing to have large families, if that is what the Lord wanted. I didn't think I would fit in. Worst of all, they almost all home schooled their kids, something I told my husband I would NEVER do!! I actually made him promise to find a Christian school before we moved for the kids to attend so I wouldn't have to home school. Only weird people did that!

Not only did we end up making the church I never wanted to attend our home church, but the Lord worked in my heart to start homeschooling my girls. I taught for a year at the Christian school, which the Lord used to prepare my heart and show me that there was a lot of wasted time in the classroom, and the attitudes weren't always so "Christian" among the students. I am now thankful that the Lord dealt with my attitude and changed my heart.

When we were missionaries to Mexico back in the 1980's, I recall telling my husband "I never want to do deputation again." We had three small children under the age of three, and it wasn't easy traveling across the US, staying in different homes. When Doug accepted a position with a full time jail ministry, I was relieved that he would have a starting salary, with health benefits, and although he would still have to preach in churches, they would be local, with no out of state traveling.

Fast forward five years, to 2003. My husband was attending a mission conference to present his jail ministry, and the Lord called him during the meeting to go back to the mission field. I wasn't even there to share in the moment. He came home and told me (although I knew it was coming, he always had a burden for missions) and I knew that big changes were coming.

We would have to do deputation again! I knew how rigorous it would be, but somehow, perhaps because I was a little older, I was more prepared for it the second time around. The Lord was so gracious with me....he took my NEVERs and made me willing to do what I would never have wanted to do if it were left up to me. Most of my NEVERs were based on fear. I was afraid that God would ask me to do something that I couldn't handle.

God can make you willing to do what you never thought you would want to. Be careful when you say never.....it may be just the thing God has planned for your life.
Posted by Carolee's Corner Canary Islands at 11:57 AM No comments:

Making the Field Your Home

I pick up missionary biographies when I need to be encouraged, and as I have mentioned previously I have been reading about Adoniram Judson and his three wives, as well as some modern missionary books that contain advice for missionary wives.

One of the key elements I notice in their writings, is how they made the decision that their new field of service was their home. I realize some missionaries have to leave the field for various reasons, and that is not what I am talking about. But while you are on the field, you must make the field your new home--and quit thinking about what you have left behind, from friends, family, church, etc.

When I am constantly thinking about what I miss the most about the states, it only makes me more discontent with my life here on the mission field. I do miss my family, grand kids, and way of life in the US, but now Tenerife is my home, and I must learn to appreciate the positive things about it and adjust to the things I don't care for.

Some people used to say that Mexico was a "graveyard" for missionaries because you had to return to the US every six months to renew your visa. When we were serving in Guadalajara Mexico, and would cross into the states, we would indulge in the delicious American hamburgers, make shopping trips to Walmart, and enjoy the way of life we missed. While in the states we didn't have to worry about getting sick from drinking the water, or deal with the filthiness and poverty. I wonder if I ever really allowed myself to adjust and enjoy my life in Mexico--rather I was often looking forward to the next visit to the states.

It is not feasible for me to visit the states now, because it is very expensive and we have used our spare resources in bringing our college age daughters home during the summer months. In some ways though, I think it will help me adjust to the idea that this is our new home, and by God's grace need to make the best of it, and become connected with the people that the Lord has put in our paths here to minister to.
Posted by Carolee's Corner Canary Islands at 9:51 PM 5 comments: