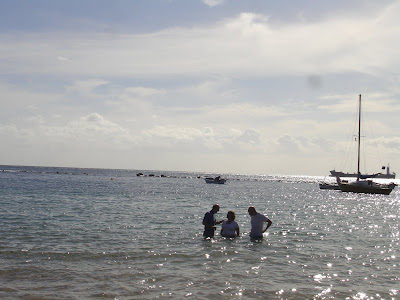 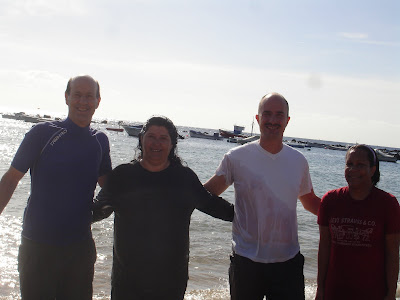 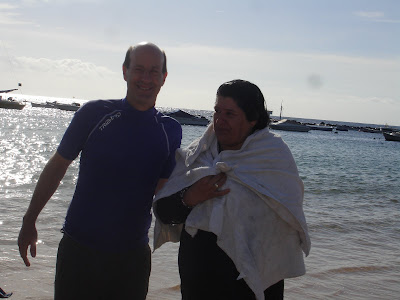 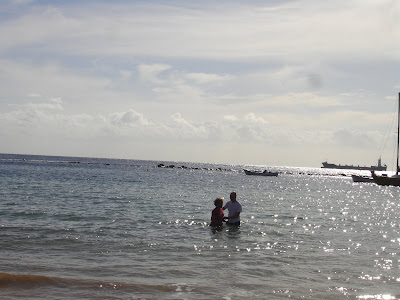 Today three young women were baptized at Las Teresitas here in Tenerife. I am posting pictures, in them you will see Doug baptizing Angela, Conchi, and Rudy is baptizing a woman named Susana. All have made relatively recent professions of faith.
Posted by Carolee's Corner Canary Islands at 10:04 PM 1 comment:

Back in the summer, Doug and our German missionary friend Rudy Thomas went visiting on the south side of the island, in a community known as San Isidro. Rudy was looking for a new place to live, and while they were down there exploring the territory, they went door to door and passed out portions of Scripture. They got a phone call from a couple from Venezuela, saying that they were Christians and were interesting in meeting us. They were disappointed that our church was on the north side of the island, as they were hoping we were closer to where they lived. They had visited churches near them, but none were doctinally sound.

Doug and I went to visit them one night, and we offered start a Bible study in their home, and we have been doing that now for about six months, every Friday night. Doug and Rudy recently started to go to San Isidro every Tuesday, and within a short time have made several contacts with people interested in studying the Bible with them. One is a group of Nigerians, who speak English. There are many Africans living here, and although our main thrust is to start Spanish speaking churches, we will minister to whoever the Lord opens the doors for us to do so. They asked for English Bibles, which we were able to provide, and they are studying with Doug and Rudy every week.

Another encouragement is when they met some Romanians living here--two of them speak Spanish very well, and two of them are learning. They also study with Doug and Rudy on Tuesdays, and one lady recently prayed to receive the Lord Jesus Christ as her personal Saviour. They were interested in attending our Friday night Bible study as well, and have been coming and show great interest in the Bible and things of the Lord. It makes for a very interesting study, as they read their Romanian Bibles along with the Spanish.

We also met a woman from Colombia who also attended our Bible study. She is also interested in having a church nearer to where she lives. So right now we are praying about finding a local or room we can rent to start a Sunday afternoon or evening service. Please pray with us that the Lord will direct us in our new endeavor. Doug will have his hands full, as well as Rudy, dividing their time between the churches they have already established in the north ( Santa Cruz, and Puerto de la Cruz), and then the new one in the South.

In addition, it would be helpful for me to get my Spanish driver's license so I could relieve Doug of some of his "duties" around the home; so he wouldn't have to take me on errands, to the grocery store, doctor appointments, or Rebekah to piano lessons--I could do these things on my own if I could drive here. It entails me going to driving school, and taking a written and practical road test, something I am not looking forward to. It can also be very expensive, anywhere from $800-1500 depending on how much practice you require with the instructor. It is a bit different driving here than in the states, and the cars are mostly standards so I will have to get used to that as well. I need to get the courage and motivation to do this--it sounds strange coming from a woman who used to drive a big yellow school bus (yes, I did that for a year when my kids were in Christian school) and had to get a commercial driver's license, taking the test in a school bus as well. I have been putting this off and am not looking forward to it, but I know this would be a big help to my husband.
Posted by Carolee's Corner Canary Islands at 11:15 AM 1 comment:

What We Can Learn from the Earthquake

I have been watching video clips of the devastation in Haiti, and I cannot begin to imagine what the people of that country have been suffering. It made me think, what if an earthquake happened here in the Canary Islands?

I have experienced a few small earthquakes, the first was in Guadalajara, Mexico; it was related to a larger earthquake in Mexico City, perhaps one of the aftershocks. It was a very eerie feeling. We also had a small earthquake in Rochester NY, not very strong, but enough to know that the earth was moving beneath you. I believe my mom felt the same one in Ohio that day.

Sometimes we live as if every day is going to be the same, we take so much for granted. I was "complaining" in my heart Sunday that the kids had used the last bit of milk, not leaving me any for my coffee--and being Sunday most of the stores are closed, so it isn't a matter of just running out to the gas station and picking up a gallon of milk like you would in the states. But the thought occurred to me, I bet the people in Haiti would do anything for a cup of milk right now, or perhaps even just a bit of water, some food, and a comfortable place to sleep. As I was taking my shower, the water suddenly got cold--once again, I thought of the people of Haiti--and images that I had seen online, of kids bathing in what looked like a mud puddle to me, flashed through my mind. How could I complain about cold water from the shower, when millions in Haiti don't even have a home to take a bath?

Yes, we do take so much for granted. Lord, help me to be more thankful.
Posted by Carolee's Corner Canary Islands at 9:27 PM 1 comment:

Recently I wondered why I have such a hard time getting out the names of the women in our church--I often stumble over them trying to get them out of my mouth; then it came to me--almost all of their names start with the letter m. With the exception of a few ladies, nearly all of them start with m. Try saying this 10 times quickly: Mari, Margarita, Marisa, MariaJose, Murly, Maribell, Maricrisi. Quite a mouthful!
Posted by Carolee's Corner Canary Islands at 2:25 PM No comments:

Going on a Mission Trip 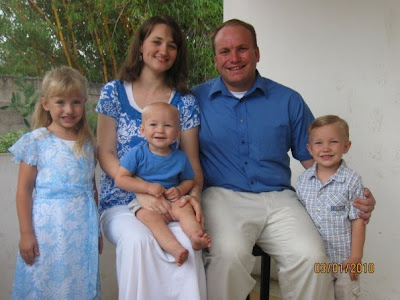 It is official, Lord willing I will be going on a mission trip to Mozambique, Africa in May! I bought my tickets yesterday. We have been thinking about it for quite some time, and it has been three years since we have seen Nathan and his family, and I really would like to spend some time with my grandkids. At their young age, they change so much, and I have never met my youngest grandson, and it would be nice to get to know them a little bit. Somehow just talking over the webcam isn't the same as being there.

There is so much to work out between now and May, vaccinations, visa, and working on renewing our Spanish residency--but I am hoping that it will all come together smoothly. I am tempted to worry about getting sick in Africa, or how I will manage traveling alone in a foreign country, but I know that God will help me.

When I see the kids, I want to celebrate their birthdays with them by taking them to Toys R Us in South Africa--something I never get to do normally. I look forward to reading a book to them, coloring pictures, playing outdoors with them. My mission: make some priceless memories!
Posted by Carolee's Corner Canary Islands at 9:06 AM 4 comments:

The Steps of a Good Man

Yesterday was one of those days when you just know that God was directing our steps. My husband, Rudy (our German missionary friend) and Michael drove down to San Isidro to do some visiting and gospel distribution. They also had an appointment at 4 pm to talk to a Romanian woman who had called because she had received one of our tracts a week ago and wanted to know more because she had just started to read the Bible for herself.

Since they had never met this woman before, and didn't know where she lived, they agreed to meet at the bakery where she worked, but since they were about 20 minutes early, Doug decided to go knock on a few doors in town to take advantage of the time. They walked about three blocks in the opposite direction, and Doug saw an apartment building, rang the bell to see if anyone would let him in the entrance (most apartment complexes are locked from the street so to get in you have to ring someone's doorbell, and hope they will let you gain entrance to the building.) He always starts on the top and works his way down, so he climbed the four flights of stairs, and knocked on a door.

A woman answered the door, and Doug told her that he was from the Baptist church, and she replied "Oh, that is funny, I am just now leaving to go meet with two men from a Baptist church named Douglas and Rudy."

Doug responded "I am Douglas, and Rudy is waiting downstairs!" I think they were all a little surprised, and recognized that this indeed was a divine appointment. The odds of Doug walking the three blocks from the bakery, stopping at the exact apartment building where she lived, then walking up to the exact door where she resided......(hers was the first door he knocked on) it was too much to be a coincidence, and I think the lady is really seeing the hand of God working in her life. They have another appointment to meet with her next week.

While waiting down on the street, Michael met four Nigerians who spoke English, and was able to talk to them as well. One of the ladies requested an English Bible, so Friday Doug has an appointment to meet with them as well.
Posted by Carolee's Corner Canary Islands at 8:34 AM 2 comments: