This morning I went to Expedia.com just out of curiousity to see how much airplane tickets were running from Chicago to Tenerife for when Hannah and Jenny come home for the summer. Much to my surprise, they had dropped over $240 each, plus they had the connections we wanted, only one stop and they didn't have to spend the night like they usually do in the Madrid airport upon their return flight to the states. We could take a gamble, and hope they come down lower in the next few months, but I called my husband and asked him what he thought, and he said to get them. You never know if you will get the same deal again, or the same connections, plus we needed two tickets together.

It is bittersweet, knowing that this may be the last summer in a long while that both Hannah and Jenny will come home to Tenerife. Lord willing, they will graduate in the spring of 2011, and we are planning a six month furlough then; we are not allowed to be out of Spain longer than six months at a time, thus the shorter furlough. Jenny and Michael would like to get married shortly after graduation, so it looks like we will be planning a wedding this summer too.

One of the stipulations of Jenny and Michael getting married is that he has to pay off a school loan--not his college as he is paying that as he goes, but he actually paid his own tuition to attend a Christian high school for all 4 years. We are very impressed with the fact that Michael is attempting to work 3 jobs to do so, in addition to going to college full time. Now that's motivation!
Posted by Carolee's Corner Canary Islands at 1:32 PM 1 comment:

Lidl Comes to the Canary Islands 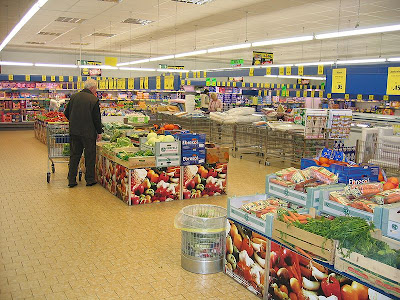 Everyone is very excited about the opening of 12 new grocery stores in the Canary Islands, the German chain Lidl (for those of you unfamiliar with Lidl, it is very similar to Aldi's in the states, which is also a German chain). As a matter of fact, it looks like Aldi's in the way it is laid out--you almost feel like you are in an Aldi store, although the products are not all the same.

Doug and I went tonight without the kids (they spent the night with our German missionary friends). The grand opening crowds have died down, so we were able to take our time and compare products and prices. It will be good for basics, canned goods, bread, staples, and had a very nice produce section. We will still be shopping elsewhere for meats, fresh milk (Lidl only has UHT milk) and items you can't buy at Lidl.

The prices were good, and hopefully with a little more competition it will drive the prices down at the other chains. We spend so much more money on food here in the islands than we did in the states, so every euro counts!
Posted by Carolee's Corner Canary Islands at 10:43 PM 4 comments:

Labels: Life on the Field

Michelle Obama just kicked off a campaign in the United States aimed at addressing the problem of childhood obesity (another example of the American government spending millions of our taxpayer dollars on programs which should be our personal responsibility as families--most of us already know what is causing the problem, we just need the motivation to make the changes). As a person who has struggled with weight issues most of my life, I can relate to the problem that we are facing. I was a normal sized baby and child (my nickname was Twiggy after the popular model in the 60's) until I reached pre-adolescence, then my weight started to become an issue. I was in the 5th grade, and after school I would come home and eat junk food, but there were also underlying emotional issues that caused me to overeat. There was a spiritual vaccum in my life, and I was trying to fill it with food; I wanted to know God, but didn't know how to find him--but even after coming to know the Lord I struggled with weight, so I can't blame it all on that.

Here in Europe they don't have the magnatude of obesity like we do in the states, even in their prosperity. What is the difference? I have noticed a few things--first of all, they have much smaller portions. The average American would be disappointed when going out to eat in a restaurant here, thinking, "is that all I get?" because we are so used to the enormous portions in the US. For the most part, there aren't as many "all you can eat" buffets, or free refills on drinks, or all you can eat salad or rolls.

Americans would do well to eat at home more often. We rarely go out to eat, and it is amazing how much easier it is to control your diet when eating at home. When we were on deputation and traveling all over the US to raise our support, we were constantly eating out and it was a struggle to control our diet. In addition, we would be invited to special dinners, banquets, and you would feel really bad if you didn't eat what people made especially for you. Fortunately my husband doesn't have a weight problem and he is always happy to sample people's culinary delights. But for someone with a health issue like myself, I had to really make a special effort not to indulge.

I am amazed when I read recipes on the internet for baking--Americans have an appetite for sweets, and no longer is it sufficient to bake a simple cake or brownie recipe, but it has to be topped with reese cups, chocolate chips, or have cream cheese added, or even have candy bars added to the mix. The more decadent the better. No longer do Americans just eat a simple ice cream cone of chocolate or vanilla--we add chopped up candy bars and make it a "blizzard." Here in the Canary Islands dessert is often just a piece of fruit, or a yogurt, or a simple custard flan.

The other difference I see is Europeans walk more. Towns are often set up with small stores within walking distance, and it is very common to walk to town and do your business, and they also climb more stairs throughout the day. They don't have as many "drive through" businesses and even if you do drive somewhere, you often have to walk a few blocks from where you parked to where you are going.

As Europeans adopt our ways, they too are seeing a rise in obesity--with the popularity of McDonald's, and American junk food--as well as activities that encourage sedentary lifestyles (computer games, internet, TV watching).
Posted by Carolee's Corner Canary Islands at 8:57 AM 3 comments:

New Names Written Down in Glory

We are encouraged by what the Lord is doing here recently. Saturday Doug took a group of our church people out on visitation, and when they were finished, a man from Nigeria came up to Doug and told him that he wanted to know God. He spoke English better than he did Spanish, so Doug showed him from the Bible, in English, how he could know Jesus Christ as his Lord and Saviour. He prayed to get saved, and the next morning came to our church services. Please pray for him, his name is Clifford.

The new work in San Isidro continues, and a Romanian family has been faithfully attending our Bible study. They even came to our church on the north side of the island, which is quite a drive for them. The wife, Jenni, prayed to receive the Lord about a month ago, and she and her husband bring two of their friends with them. They come to Bible study with their Spanish and Romanian Bibles, and highlight verses as we go along. It is so encouraging to see people who are so interested in learning about the Bible. Today (Tuesday) Doug, Rudy, and Chesster studied with them, and three of them (Valentino, Simona, and Maritza) prayed the sinner's prayer, and asked the Lord to be their Saviour.

We are trying to locate a building or room to rent in San Isidro to hold a church service in. There are many possibilities, so please pray that we find the right one, and for a good price as we are a small group of people and need something affordable.

After two years of paperwork, Doug has finally been given "official" documentation to enter the jail here. He has been going in and visiting inmates, but now he has the government paperwork necessary to enter more freely and on a regular basis.

Our oldest daughter Amy and our nine month old grandson will be visiting us the month of March. We haven't seen Amy since we left for the field, and it will be nice for us to spend some time with her. She hasn't traveled much outside the United States, so please pray that her travel would go smoothly.
Posted by Carolee's Corner Canary Islands at 7:42 AM 3 comments: 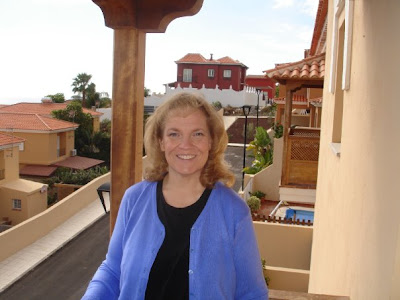 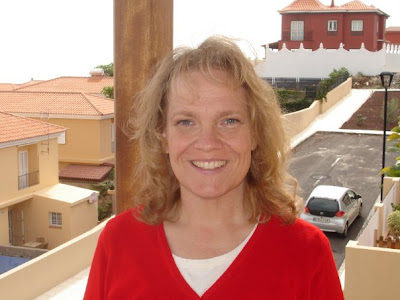 Yours truly! Just thought I would post a more recent photo for those of you who don't see my pictures on facebook. This was taken on our balcony, off our bedroom, and you can see the street below, and other houses below ours.

I have never seen so much rain in my entire time of living here in the Canary Islands. Yesterday it rained very hard, all day long. There was extensive flooding in many areas, with several roads closed, and airport closings due to loss of electricity. The island of Tenerife, along with some of the other islands, are in a state of emergency right now, with only necessary travel being advised.

We lost our electricity for part of the day and most of the night, but managed quite well, eating crackers, cheese and peanut butter for dinner and playing games by candlelight. I even managed to heat a cup of coffee on a ceramic candle holder Rebekah had in her bedroom--so I was very happy! It was a blessing when the electricity came back on early this morning, and made us realize how much we depend on it. It teaches the importance of emergency preparedness.
Posted by Carolee's Corner Canary Islands at 2:01 PM 3 comments: