Dotting the pie with butter, just like Grandmother Dorothy used to do! 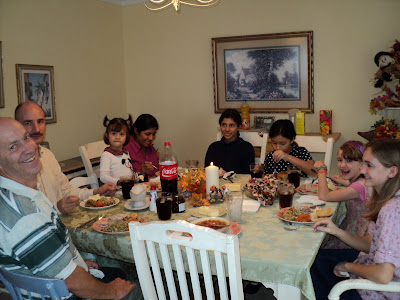 Doug served the drinks--so please forgive us for having the bottle of coke on the table (I realize it isn't good etiquette and it doesn't look very nice on the table ; ) 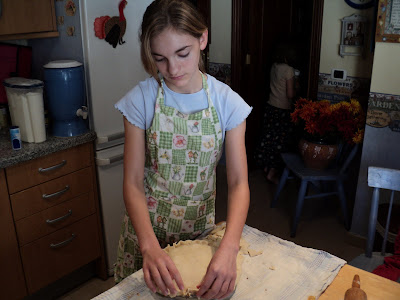 Rebekah learning how to crimp a pie crust

We had an enjoyable Thanksgiving this year, and once again we invited our German missionary friends. I hope they are learning to like American food, because we serve the same traditional Thanksgiving dishes every time. I bought a small turkey, made dressing, sweet potatoes, green bean casserole and pumpkin pie, while Rebekah made the dinner rolls, mashed potatoes, and apple pie. We make a great team, because I don't like to peel the potatoes or apples, and I had Leanna do the chopping of celery for the dressing.

Oh, I forgot to mention the gravy! I bought a different brand of boullion, and without tasting (big mistake but I didn't want the calories) it turned out seven times too salty--so I kept having to dilute it. I hate to throw anything away, so I now have a half gallon of watered down gravy in my fridge--I figure I will make chicken and noodle soup with it. Then I realized I had put about six of the same boullion cubes in the dressing mix, so I decided I better taste that too. Good thing--as all you could taste was the salt. At the last minute I had to make a whole new batch of dressing.

Mind you, there is no such thing as Stove Top stuffing from a box here, so fortunately I had more celery and onions so I could start over. I didn't have a lot of bread though, so I was scavenging through the cupboards to see what I could throw in with it. I thought about rice......but then I remembered I had a bag of frozen peas in the freezer.......so this year my dressing had peas in it. Sounds interesting, doesn't it? It really isn't that far out though, because I have a delicious recipe for dressing with yellow and zucchini squash in it.

That is when I started to feel kind of panicky--and as they say, haste makes waste--from then on out I was dropping things, burning myself, pots boiling over, and wondering what kind of meal this was going to be. I have cooked many turkey dinners, and I don't like it when the food isn't going to turn out just right. I like it when people rave over my good food!! My reputation as a cook was on the line.

Everything turned out well enough, because our German friend had three plates of food according to my husband (maybe he was trying to make me feel good). I felt so wiped out afterwards that I told my husband that this year he can cook Christmas dinner! He replied, "Are you serious?" I was serious, but I know between now and Christmas I will recover and decide it would be easier to cook it with Rebekah and Leanna's help than to let my husband loose in the kitchen, but it would definitely be a fun experiment!!
Posted by Carolee's Corner Canary Islands at 7:22 PM No comments:

Lessons Learned from a Shepherd and His Goats

Yesterday as we took Rebekah to her piano lessons, we were blocked in by a herd of goats traipsing through her teacher's neighborhood in La Orotava--it was quite an amazing sight to behold, as there must have been at least 200 of them. It isn't everyday you see a herd of goats going through a residencial area, and it gave us a thrill to watch their behavior. Perhaps the residents weren't happy to watch them graze on their flower beds, and they left behind a great amount of residue which I am sure they didn't appreciate, but we enjoyed it (since it wasn't in our neighborhood).

Much of my husband's work as a pastor revolves around checking the state of the flock. When someone doesn't come to church, or he hears they are having struggles, he is concerned about their welfare. God has put in his heart a love and genuine concern for the people that he ministers too. Sometimes I am tempted to grow weary of people's lack of faithfulness, or when they go "astray" and return to their destructive behaviors, but my husband always seems to have the patience to go after them, again and again, in efforts to restore them to the fold. Not that he "lords" over the flock, but he desires to see them live an abundant, fruitful life, showing them greener pastures.

How much more, our loving Shepherd, deals kindly with us--caring for us in a way that goes far beyond our comprehension. It brought to mind this great promise from the book of Isaiah 40:
11:

"He shall feed his flock like a shepherd: he shall gather the lambs with his arm, and carry them in his bosom, and shall gently lead those that are with young."


By the way, I found the picture on another blog which was taken by a woman who lives in the Canary Islands and photographs her experiences. She takes excellent pictures, if you would like to see them, just click on this link. I love the way she captures the culture here.
http://tenerifejournal.blogspot.com/2010/03/94-goats-and-city.html
Posted by Carolee's Corner Canary Islands at 9:58 AM No comments:

Labels: Life on the Field, Ministry

Last evening was delightful, just a little departure from the normal routine that came as an unexpected surprise. Doug had to go to downtown Santa Cruz, and rather than sitting at home with the girls like we usually do, I decided we would go with him and walk around the pedestrian mall while he attended to his business.

As we walked past McDonalds, we noticed they were setting up music stands and chairs in the plaza, so I knew there was going to be some sort of concert. We continued our window shopping, and went back to McDonalds for a cup of coffee. Much to our delight, they were handing out programs for the concert which was starting in just a few minutes. It was a beautiful, cool evening and we drank our coffee listening to Mozart being performed by the Santa Cruz Municipal Band. They are professional musicians, and it was a wonderful home school opportunity--the kind of music appreciation class you dream about, because I rarely take the time to seek out such field trips but this one just fell into my lap so to speak, and the best thing of all it was free.

Leanna read a story about Mozart this year, so now she can put a tune to his work. It happened to be his "Turkish March," and this morning she was humming the tune as she started her school.
Posted by Carolee's Corner Canary Islands at 9:58 AM No comments: