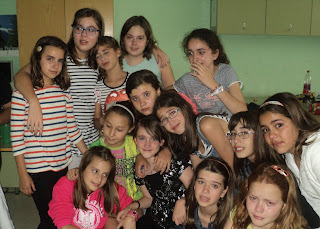 Back in September I had an entry called "School Days" so I thought it would be fitting to tell about the girls' last day of school as well.

We were all counting down the days on the calendar until the final day of school--no more hurrying off in the morning during rush hour traffic, no more packing the lunches and meeting the girls at the school for the 1.5 hour lunch/siesta, and no more late nights for Rebekah, doing homework past midnight.

It was with very mixed emotions that we left the school . In September I will be traveling with the girls to the states for a few months to visit our family as it has been over two years since they last saw their older sisters and grandparents, but Doug will remain here in Tenerife to work. Rebekah and Leanna will be doing distance learning via the Bob Jones University Home School Academy.

Our hearts became endeared to the caring teachers and staff at Mayco School of English. When we enrolled our daughters in the school we were told that academically  it was  a very good school with a "family" type atmosphere. The staff embraced our girls and listened to every concern.

When I went to pick Leanna up on the last day of school, one of the boys in the class came up to me as I waited outside the gate and said "you are going to be here a while because all the girls are in the classroom crying and hugging Leanna."

The secretary commented that the girls in Leanna's class had been crying all afternoon. One of the parents asked her why--crying because it was the last day of school?

"No," she replied, "because Leanna is leaving."

I was so touched by her comment that even I had to hold back the tears. Every day for the past ten months I picked the girls up from school--and none of the other parents really ever spoke to me except when I would say "hola" and that was the extent of our conversation. On the last day a few parents even came up to me and gave me a hug! It really made me feel good to see that people really did care even though they didn't always show it.

When Leanna finally came outside of the school, she was surrounded by her girlfriends, all of them sobbing. Leanna cried all the way home, and off and on all evening, finally crying herself to sleep that night. It was emotionally draining for her.

In general Americans tend to voice their feelings more readily, and sometimes living in a foreign country we mistake the silence for unfriendliness or rejection. It helped me understand that in a different country it takes time to build relationships, and gave me a renewed love for the people here. I hope we can continue some of the friendships that Leanna made in the school.
Posted by Carolee's Corner Canary Islands at 10:26 AM No comments: