I saw this on Facebook recently and thought it was funny--a pastor uses familiar excuses with a bit of a twist, when compared with the reasons why many people quit going to church . 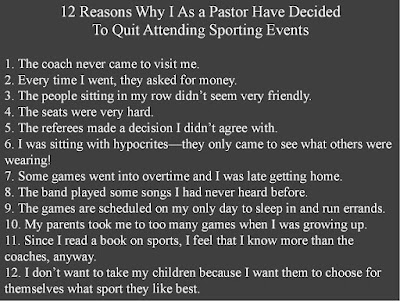 Posted by Carolee's Corner Canary Islands at 12:27 AM No comments:

What on Earth is a Curiosity Room? 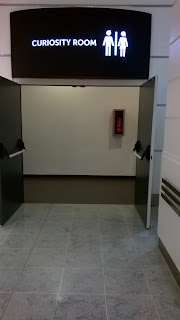 The  girls and I were shopping last week at the Carrefour in the Centro Comercial Meridiano in Santa Cruz, Tenerife and needed to take a restroom break. In Spanish, the word for public restrooms is "Aseos" but for some odd reason, the designers of the Meridiano mall choose to put "Curiosity Room" over the doors. I have never heard that term used in English, so my curiosity was getting the best of me. I thought it may be a British saying, as we have many people from the UK residing on the islands, but none of my friends ever heard of it in their country either.

My father suggested that perhaps it was a mistake; maybe they translated the words incorrectly and meant to say "Courtesy Room" which would make a lot more sense.

So I found the mall's Facebook page and wrote them. Their response was that it was not a mistake; they meant to use the word Curiosity-- and that it was their intent to "stimulate and invoke sensations" as each stall has vinyl phrases with witty quips adhered to the walls, and for example, on the mirror there is one that says "let's make-up." I don't know how much money they spent on their recently remodeled signs, but in my opinion it creates confusion, as most of the people that live here are Spanish, and why not just put "Aseos." I suppose that would be too boring. In my opinion, Curiosity Room sounds weird, almost deviant, especially in a public restroom. What do you think?
Posted by Carolee's Corner Canary Islands at 5:32 PM No comments: